Eat your chocolate
wash your brain
dada
dada
gulp some rain.
– Tristan Tzara
I’m constantly amazed at the capacity some people have to fail as human beings, or more specifically as products of nature. We have such great inherent artistic talent, and yet we are so often contrived in our behavior. Nurturing, for some, is done selectively and with ulterior motives. Efforts to save the planet come only after we’ve all but destroyed it. The art of being fully human remains lost to many who are kept afloat by a flotilla of prefabricated and standardized ‘paint by the numbers’ ideologies and conventions.
I write this on the heels of my mother’s recent passing, so as I let the tides of emotion wash over my head, I’m a bit vulnerable to the often groaned about process of grieving. Whatever comes comes; whatever goes goes – the good, the bad and the inane. Good mourning to all, I say, especially to me.
Therefore, I have resolved to refuse any attempt to self-repress my emotions or self-censor my thoughts during this period of bereavement. Mind you, this doesn’t say much, since on almost any given day this notion is ‘par for the course’ for me anyway.

The word ‘nature’ has different connotations. It might refer to behavioral characteristics or the natural environment. The word ‘nurture’, on the other hand, is just a verb that means to care for and encourage growth and development. Now, some people have nurturing natures, while others do not. I mean it’s pretty ‘cut and dry’. And then, we have the word ‘art’, referring to the work produced by those of an artistic nature, regardless of whether such works are ‘naturally’ occurring or not. It’s the latter case I might refer to as ‘contrived art’.
With the passing of my mother, an artist of paint, music and letters, I have been mulling over the nature of art, especially in trying to identify the nexus between concrete and contrived art. I’m less interested in finding the dividing line, but rather the vortex at which the two blend. I have my reasons which will become clear in time … but not necessarily in temporal space. Wait for it.
Dadaist Hans Arp once remarked, “We do not wish to imitate nature, we do not wish to reproduce. We want to produce. We want to produce the way a plant produces its fruit, not depict. We want to produce directly, not indirectly. Since there is not a trace of abstraction in this art we call it concrete art.”
When asked recently whether this was possible or not, I commented on ways of avoiding ‘contrived art’. Specifically, I suggested the following:
This conversation was triggered by a quote by writer and poet Michael Meade: “The nature of this world requires that the beauty of it be lost, that it be rediscovered and lost again, that the eternal patterns of it become forgotten in order to be relearned, that the designs of life be recast over and over again.” 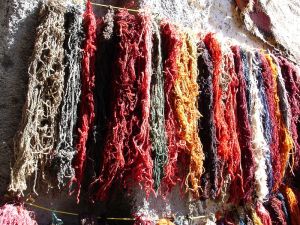 The quote was in reference to the myth of an old woman who weaves a garment and her black dog who, in her absence, destroys her unfinished work. Her work unraveled, she is left with no choice but to begin anew, ultimately fashioning something different, unique and exquisite.
The garment is a metaphor for the world; its creation and destruction are merely phenomena dependent on our own random acts. It suggests that without death, there is no life, and obviously vise versa … and that even after death, life not only goes on, but can begin anew. Nature, life and art always hang in the balance by a loose thread, with mankind always needed as the ‘black dog’ pulling at them, especially to trigger renewal.
Taken out of context, however (and as it should be), something about the sentiment in Meade’s quote just doesn’t sit right with me … and so I can’t help but feign the black dog. The quote also seems to imply that without man’s capacity to learn and forget, ‘this world’ (i.e., nature, the designs of life) is incidental. Myths, which are wholly man-made phenomena, are almost always contrived … and oh how man loves to revise history for his own contrived purposes!
It’s one thing to refer to the cycles and circles of life and the natural order of all things that are born and, in time, wither and die, only to reborn into one form or another. It’s another to refer to ‘our’ penchant to discover, qualify and categorize things (and in many cases destroy them) as the context and stimulus for which ‘life’ recasts itself. For example, Columbus is often credited with ‘discovering’ the ‘new world’, as if it had no claim of existence on its own (notwithstanding those of Norse explorer Leif Erikson and obviously the American Indian tribes, the original and true native Americans).
Nature doesn’t require anything from us except to be left alone and allowed to do its thing. Moreover, we don’t need to nurture nature. We need only to nurture ourselves. The same applies to art. The more we pester with both, the more contrived they and our efforts become. Eventually, we are left only with parroting and authentic simulated facsimiles: yet another painting of a bowl of fruit … Disneyland … six of one, half a dozen of the other.

Skills wise, there are differences between practice and production. To nurture our talents as artists, we need to learn, not forget. In fact, even in language use, at least in English, there is no ‘present continuous’ tense for the verb ‘forget’. We don’t say “Oh, I’m forgetting. I’m forgetting. I’m forgetting … it’s gone.”. We might say, “I’m trying to forget her”, placing emphasis on the word ‘try’, another act of contrivance.
More importantly, I think, is our being open to learning new things each day to add to and complement our existing knowledge and to foster the creation of new ‘art’ forms from old behaviors. In other words, 1 + 1 = 2 … never 1.
In conclusion, don’t TRY to create art. Just do it. Don’t TRY to nurture and love your fellow-man. Just do it. Art and life should not be defined by man’s contrived nature. Any dadaist knows that.
PS. Dada Saves
——————————————————————————
Click Here For My Other Posts On Dadaism
Other ‘Why Not’ Links:
Suggested Reading