Skip to content
HomeRomney Shambles: A Sham For The Lambs

“Who let the dogs out? Who, who.” (Martin Luther King Day parade, 2008)
“I love this state. The trees are the right height.”
“I’m not familiar precisely with what I said, but I’ll stand by what I said, whatever it was.”
– Mitt Romney

Today in the USA is Labor Day, a public holiday. Most Americans are taking the day off and celebrating. Of course, many aren’t really sure what they’re celebrating … but shucks, who cares anyway, right? Let’s not sweat the details! After all, ignorance is bliss.

Mind you, many Americans are lost in a ‘glitterfried’ parade of gleeful ethnocentric sentiment, spoon-fed to them daily by neoconservative concerns and multinational corporations. The main designs of these true ‘powers that be’ are to make money, to consolidate ultimate power and to defend their assets, financial or otherwise.

Sound familiar? Glory be! It’s the new American Way! And, judging by the debt the average American carries, you can tell just how close to home these yearnings have been embraced by the asses … sorry, I meant masses.

Yes, it’s obvious these ‘controlling interests’ are doing their best to keep the gravy train rolling. They’ve done a fine job of ensuring that their ‘passions’ have ‘trickled down’ to the ‘average Joe’, as well! In fact, there’s even a clique called the ‘Republican Party’, aka The Grand Old Party (GOP), to which any feeble-minded conservative zealot can swear his, her or its allegiance. All are welcome, even Libertarians and Teabaggers! The party’s message is simple: feed the rich! Dig a bit deeper and you find the usual subliminal command, as well:  consume and conquer; the one with the most at the end wins … death is just a minor detail.

But of course, this is why organized religion (read: the extremist Judea-Christian bible humpers) has been recruited, to prod the sheep and lambs into believing there’s life after death for them … and that for the right donation (read: tax-deductible contribution), true believers and card-carrying conservatives can buy their way into heaven. Amen! Hallelujah! Charge it! Praise the Lord … and don’t forget to pass the ammunition, chimes the National Rile Association (NRA), another transmogrification of American right-wing political ideology, like the KKK and other white supremacist groups. Oh Lord, please let those ‘boolits’ from heaven rain down on us! Genuflect, genuflect, genuflect …

Speaking of ‘trickling down’, I guess you heard that Mitt Romney is now the GOP’s ‘de facto’ candidate for the President of the Unites States. Yes, this would-be ‘Emperor’ was duly christened in the pomp, romp and circumstance of the Republican National Convention (RNC). As promised in my last post, here’s a little more about good ole ‘Mittens’.

And Still He Wants Our Votes 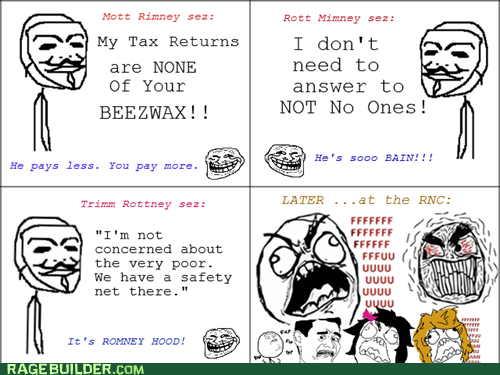 Over the last few months, Mitt Romney has become notorious for both pissing off America’s allies abroad and insulting the sensitivities of the good folks back home. And still, he wants our votes!

‘His Eliteness’ is brazenly smug about the wealth he accumulated at Bain Capital (we love to outsource; no questions please) by sucking the lifeblood out of employees who lost their jobs in heartless company takeovers. And still he wants those ex-employees’ votes.

He and his newly appointed running mate, Paul Ryan (think: the film Omen 3 or Eddie Munster) wants to get his hands on Medicare and Medicaid and gamble them away to the same mindless Wall Street Banksters who demanded bailouts for mismanaging YOUR money as they tried to rip you off some more. And still, he wants our and especially senior citizens’ votes.

He smugly refuses to answer questions about his stewardship at Bain Capital, but takes credit for profits and jobs created long after he supposedly left the director’s chair. He refuses to provide any form of accounting proof for his claims. I guess he thinks he has plenty of money, so ‘details’ don’t matter. And still, he wants our votes.

He took a $77,000 tax deduction for his wife’s ‘dancing horse’, Rafalca, but is only willing to grant a paltry sum of the same to lower and middle class parents for their children, And still, he wants our votes.

He prides himself on being a ‘son of Michigan’, but when the state’s auto industry really needed him, he stabbed it in the back by voting against a bailout, preferring that “Detroit Go Bankrupt“. Later, he made heads spin by claiming credit for the auto industry’s comeback! Of all the nerve! And still, he wants auto workers’ votes.

He stubbornly refuses to release his income tax statements for the last 10 years, as every other presidential candidate has done since the 1960s, including his own father! Romney released last year’s return. His wife, Ann, boldly stated, that’s all “YOU PEOPLE” get. And still, he wants our votes.

I could go on, but really if you don’t get it by now, you must think that Newsweek magazine’s plastering his face on its cover with words, ‘Wimp Factor‘, was some of kind of honor.

Romney suggests that his ‘leadership’ in business makes him qualified to run the country. Ok, here’s what that means at the practical level, in other words what we can expect from Mittens: Buy out companies for pennies. Fire the workers. Automate (SkyNet) when possible. Earn billions of dollars in tax breaks by outsourcing jobs abroad. Deposit the profits offshore.

If Mitt were elected and stayed true to form, he would gut the nation once and for all, auction off the leftovers to the highest bidder and then move overseas to keep a close eye on his profits deposited there. As I said above, it’s all part and parcel of the new elitists’ American Way!

Yes, Mittens is nothing more than a modern-day carpetbagger, or as President Obama suggested ‘Romney Hood’; he steals from the poor and give to the rich. Moreover, he’s an insufferably indignant; ask him a question and he refuses to answer. If ever a book was written about his campaign, it would be titled ‘Romney Shambles: A Sham For The Lambs’.

Make no mistake. If Mitt and the GOP could simply buy your vote, they would in ‘grand old style’. Yet, since they can’t, they have to resort to ‘carrot on stick’ lies … and now voter suppression.

That’s right. There is now a desperate and concerted attempt by the GOP governors to block voters from getting to the polls. They’re dumping voter information faster than Romney’s aids were shredding documents when he left his office as Governor of Massachusetts. Talk about being two-faced! The GOP wants voters to prove their identities at the polls with a Voter ID, but have no problem allowing supporters of their ‘Super Pac’ funds to hide anonymously behind their donations. Oh the hypocrisy! Oh the humanity!

In my next post, I’ll discuss the whole Voter ID conspiracy and why the whole issue comes down to nothing more than age-old discrimination against the poor, the elderly and in general, immigrants and people of color. It’s just another pathetic ploy by the usual suspects: he neoconservative elite, Big Business, the 1-percent, et al. It’s the very reason why so many are occupied with occupying the sorry state of things across the globe.

The bottom line: Mitt Romney and his pals have more money than God … but they want more of yours anyway. His whole campaign, the usual GOP trickle down voodoo economics stance on taxes, really boils down to this: ‘he pays less, you pay more’. This is not rocket science. Just Say No to ‘Mittens’.