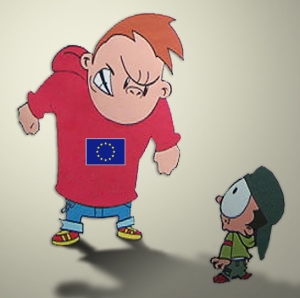 What lies behind you and what lies in front of you,
pales in comparison to what lies inside of you.
– Ralph Waldo Emerson
It is dangerous to be right
when the government is wrong.
– Voltaire

Let me make one thing perfectly clear: I am not an economist. That’s ok though because the lesson of today’s sermon has less to do with economics and more to do with emotional blackmail and bullying … and yes, a bit of politics, too – especially in relation to Greece where these days insanity is the ruling rationale of the day.

In my last post, I referred to the dire economic straights Greece is in concerning it’s debt. It’s a precarious situation to be in because in deciding how to resuscitate itself the country is basically in a ‘damned if you do and damned if your don’t’ position. Meanwhile, economists far and wide have weighed in on the crisis, mostly waxing doom and gloom. More troublesome still is that the country is practically being forced by its peers into adopting austerity measures that are not only unpopular back home, but also quite ineffectual in both the short and long term.

For its ills, Greece’s economic ‘partners’ in the European Union (EU), all with vested interests, have prescribed some very bitter tasting medicine. Unfortunately, in this metaphor, the patient has been misdiagnosed and the medicine will eventually prove fatal. Some even argue the country is already brain dead and that it’s only a matter of time before the decision must come whether to amputate from the neck up or neck down before ‘the plug is finally pulled’.

Standing in the corner

I’ve often written about the need to defy the expectations of others and yourself. This is especially true when you find yourself pushed into a corner supposedly for your own benefit. These pushy fellows may have also remanded you to corner and may have also labelled you a ‘dunce’ in someway, in light of deficiencies.

Such are the times when you are bombarded by people all around you telling you the ‘right’ thing to do. Sometimes they also tell you the ‘wrong’ thing to do! Regardless, those who egg you on to a path of self-repression tend do so mainly to satisfy their own perverse needs or even pleasures. Their expectations really has very little to do with you and your interests, or even sanity! Scuh is the case with Greece, but I’ll get back to that in a moment. 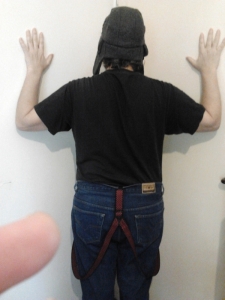 When you look in a corner all you see is … the corner. Turning to the left or the right will afford you only adjoining walls. Claustrophobia may set in as you discover that no matter which way you turn, left or right, you simply hit a wall. Of  course, banging your head against them is not an option, though it seems to be an often tried measure.

Keeping perspective in such situations is all important because an ‘about face’ is needed. This simply means: try turning around. The funny thing about corners is that they can either point to nowhere … or everywhere. It all depends on your point of view and stance. Moreover, when you are pushed into a corner, it’s awfully hard to push back when you are facing the corner, again because all you see are dead ends. Again, turn around and behold your other options.

As I mentioned above, such is the case currently in Greece, a country riddled with debt and enduring serious blows to its national pride. The country is sinking into turbulent economic waters from the weight of (warning: many pejorative adjectives to follow) havoc wreaking harsh EU sanctioned draconian austerity measures designed to do exactly the opposite of what they portend to do.

The result of earlier measures have been wreaking both economic and social havoc in Greece for the last 2 years. Ironically, the carrot at the end of a stick, this time around and yet gain, is a financial bail out which in all honesty doesn’t really solve the country’s financial problems.

Now the EU is very nervous that will Greece will default on its current financial obligations to bond holders, et al. If that happens, Greece will most likely drag the entire EU down into insolvency and bankruptcy – a vacuous whirlpool of “I told you so”, as predicted by many western and American manic-depressive economists.

I may be oversimplifying things here, but any debt expert will tell you that when you are drowning in debt, the last thing you should do is apply for more credit and saddle yourself with even more debt. You are supposed to cut up your credit cards, not apply for more. Note to Americans: if you can hardly make your mortgage payment, don’t go out and take a 2nd mortgage. Yes, homeowner equity is a myth!

Still, the powers that be in the EU think otherwise. Apparently, the age old maxim of throwing good money after bad is perhaps just a silly notion. They’re suggesting that “what any fool can you tell you” is just plain wrong – and, they are nauseatingly smug in maintaining their delusion, as any ‘oppressor’ would be. Why? Because they are bullies … pummeling Greece into the strangling ropes of debt and social upheaval.

For the most part the EU, like most bullies, has issues concerning its own self-image, authority and even values. Some bullies can be characterized as narcissistic; they exhume arrogance. Other bullies, however, tend to compensate for their own lack of self esteem by lashing out to help them feel superior. The EU I would say represents “all of the above”.

Now, Greece of course is a victim. It may be true that it is also a victim of the ineptitude of its own political parties that are more interested in party politics, gaining votes and winning elections than effectively running the country in any modern and effective sense. Still, that doesn’t excuse the EU for its misguided hoodwinking of Greece.

For all its commissioners’ talk of European unity, the EU’s stance on Greece has taken the form of an irate dog owner whose pet has just shit on the kitchen floor. The questionable austerity measures and all the snide scolding and berating of Greece for its lack of anal retentive northern European rigidity is tantamount to ‘rubbing the dog’s nose in it’s mistake’. It serves no purpose and is just an act of cruelty. Moreover, holding the promise of a questionable financial bail out over the heads of Greek citizens’ heads is sadistic. The policies of the EU represent nothing more than wolves in sheep clothes, and these wolves are no less than ‘banksters’ and financial terrorists. It’s bullying plain and simple and it needs to be stopped.

What’s also the truth is that the smug confidence displayed by the EU commissioners is theatrics and a ruse. Most likely, it is a false sense of confidence belying a rising sense of panic over the loss of authoritarian control. It is a harbinger of a foreboding and forbidding sense that its economic and social short-sightedness is coming home to root. 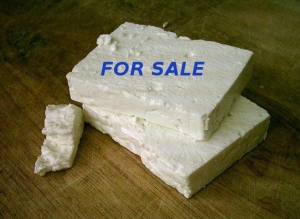 Yes, at this point the Germans and French are desperate to avoid the collapse of both its union and currency. And, you know how it goes, when people are desperate they are more than likely to tell you anything … even that the moon is made of fetid Feta Cheese.

A few nights ago, as cities throughout Greece erupted with fire and violence, Greek Parliament members thumbed their noses at the chaos and mayhem exploding outside their very doors. In Athens, the police force, sworn to ‘protect and serve’ apparently ignored the plight of Greek citizens and shop owners. They stood their ground protecting the parliamentary proceedings, not unlike some perverse version of Iraq’s ‘Royal Guards’. To make matters worse, peaceful protesters were teargassed and sprayed with pepper spray to disperse – a clear trampling on citizens rights in terms of freedom of speech and rights of assembly.

Moreover, mismanagement of this crisis by all involved has fanned the flames of racism. Old wounds are being picked, as Greeks are growing weary of heavy German influence within the EU. Fresh wounds are blooming as German and French disdain for the Greek mindset is being expressed. More disconcerting is that as Greeks turn against Greeks and Germans turn against Germans, their respective governments can really care less. Of course, no one like the French, but that another matter altogether!

Personally, I think the attitude that the EU commission has displayed towards Greece speaks volumes about its lack of regard for the true will and welfare of the average Greek, let alone EU citizen. Since push has come to shove in light of Greece’s plight, the EU has also shown complete disregard for the sovereignty of another country’s government to manage or mangle it’s own political and economic affairs – regardless of how mind-numbing or ass backwards it is. Yes, Greece has a lot to answer for, but so does the EU.

According to the EU and its commissioners, joining the ‘monetary union’ means membership for life … sort of like joining the mafia. In for a penny, in for a pound … or ‘Euro’ in this case, I guess. Failure to conform to the union’s directives brings harsh penalties, brow beating and severe tongue lashing. Obviously, there is something fundamentally wrong with any organization which basically locks an unbreakable shackle on its members’ legs. You and I have I’ve heard this before under a variety of monikers … slavery, monarchism, feudalism, fascism, dictatorship.

A colleague of mine, ‘Teacher Dude‘, a teacher and citizen journalist celebrated in some circles for his photography, likens the EU’s intentions to those of the Borg of Star Trek lore. The Borg, a hive minded juggernaut of cybernetic organisms, warns any life form it comes across that “resistance is futile; you will be assimilated”. Sound familiar? The Borg uses force … but so does the EU in the form of economic and emotional blackmail.

In a twisted way, it reminds me of the old Rodney Dangerfield joke “I went to a loan shark and borrowed $500. I’ve been paying back $200 a month for six years and I still owe him $800.” OK, the EU may not break your kneecaps if you default, but it will enslave your citizens.

The bottom line: there is no room for bullies in our society, neither in the school yard, nor in our governments. Bullies need to be confronted and exposed for their civic and humane shortcomings. For individuals, this means taking back control of their lives, even if it means wrestling it away from those desperately trying to control and manage it for them.

Yes, Greece needs to defy the expectations of those they are emulating to be. It needs to stop being in denial of its own inefficiencies. It needs to stop running on pride and start concerning itself with its dignity – and that of its people. To me, the problems in Greece are less economic in some ways and more psychosocial in others. Unfortunately, ‘denial’ is in such great abundance these days. In the end, it may prove true that money is not the root of all evil; denial and pride are.

PS. A quick shout out to the good folks over at www.slackertalk.com for the all too brief discussion on my armpits. Google alert this: 😛