There are some things that are just too hard to swallow. On January 8th in Tucson, Arizona, a clearly deranged 22-year old, Jared Loughner, purchased ammunition from a Walmart, took a taxi to a Safeway supermarket where a political meet-and-greet was being staged by U.S. Representative Gabrielle Giffords, and then opened fire on Giffords and her constituents because … he wasn’t happy with her response to a question of his at a previous political rally. The incident left 14 wounded and 6 people dead, including a judge and 9-year old Christina Green.

Yes, there are some things that are hard to swallow. One such being that “we the people” of the United States have brains. This is obviously not the case because we continue to allow gun-related tragedies to occur. Really, it pains to me write this, because I would like to believe that despite soaring crime, violence, racism, and politically correct intolerance we are a nation of humane, rational, peace loving people. I would like to believe that Michael Moore was wrong in his depiction of us in his film “Bowling for Columbine

” as phobic gun loving sheep willing to be brain washed by political rhetoric, big business and organized religion. I would like to believe that lessons have been learned in the wake of the horrific tragedy this past week in Tucson, Arizona. But, you know what? I’m wrong on all counts: None of the above is correct.

The argument on gun ownership should be a moot point. It’s not. Can someone please explain how many more dead 9-year olds we need before we realize that guns have no place in our society?

Trust me, I’m LESS worried about the sudden uprising of a tyrannical government

here in the United States. I’m MORE worried about the possibility of having my head blown off at the local supermarket or 7-11.

Loughner purchased a Glock 9mm handgun at a Sportsman’s Warehouse. Such a gun is not used for hunting. In fact, the gun used in the shooting held a clip with 31 rounds -more than triple the normal capacity of this gun’s magazine. A “federal assault weapons ban” established by the Clinton administration in 1994, prohibited such magazines for this gun that held more than 10 rounds. The Bush administration

purposely let the ban expire. It didn’t happen by accident, it happened on purpose compliments of the same presidential administration that sent almost 20,000 Americans to their deaths in Iraq.

In the United States, federal law only prohibits the sale of firearms to those who have been convicted of a felony or to anyone who has been “adjudicated as a mental defective”. Of course the implementation of this law varies somewhat from state to state, thus illegitimizing the term “United States”. After posting a Youtube video claiming that the school acted in violation of the U.S. Constitution, Loughner was denied further attendance at Pima Community College until the school received medical proof that he was not a threat to himself or others. He also had a prior arrest record.

Loughner was clearly deranged. His school knew it, his friends knew it, the local police knew it, and he pretty much made it publicly known via his ranting and raving internet posts on his MySpace and Youtube accounts (et al). Nevertheless, he was easily able to purchase the gun and ammunition since Uncle Sam apparently didn’t know it and obviously could care less about what everyone else knows. So it was just another case of “hey, let’s give the boy a gun” and ask questions later – as in good old American tradition espoused by the National Rifle Association (NRA) and many Libertarians and Tea Party members.

Something is wrong in America: we seek to ban toys from McDonald’s Happy Meals to protect our 9-year olds’ health, but then we also sell at Walmart and places like Sportsman’s Warehouse 10-round clips for about 40 dollars to anyone who wants them. No questions asked.

This sad commentary on our society gets worse. In Arizona, the legislature was spurred to sign emergency legislation baring protests within 300 feet of a funeral and within an hour from its beginning or end. All because a church group claimed it would picket the funeral of 9-year old Christina Green and the other the shooting victims. Yes, in the name of God, these fervent zealots regularly stage protests at funerals of homosexuals, AIDS victims and in some cases, even soldiers and shooting victims. Their website, http://www.godhatesfags.com/, sports deplorable rhetoric including endearing mantras such as “God hates America”, “God sent the shooter!” and “Praise God for ALL his works, and BE YE THANKFUL!” Yes, another twisted case of praise God and pass the ammunition… sort of what Sarah Palin

In light of the above and at risk of writing something sounding like the fevered ramblings of the shooter, I feel implored to say that once again our government and society has failed us. Moreover, the media and our political parties, rife with political rhetoric, have done nothing but conflagrate things. The argument that political debate has become too heated, and that it possibly played a role in the mindset of the shooter, is not only valid statement, it’s also an understatement. 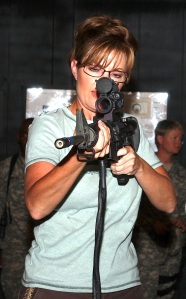 Once upon a time we had politicians and journalists. Today we have political personalities and news analysts, and the line between journalism and entertainment has become blurred. What’s more convoluted is that under the guise of “fair and balanced

” journalism we allow political buffoons to sling around gun metaphors and war mongering labels such as “traitor” and “treason” only to incite hatred and violence against those with opposing political views. Some are vehemently engaged in emotional terrorism by politically and anally labeling of all things these days: conservative, liberal, ultra-conservative, Democrat, Republican, Libertarian, vegetarian, etc. Lord, things were so much simpler when all we had to worry about were the communists!

It should be obvious that politicians and political pundits should educate, not incite hatred. Nor should they be allowed to pervert the news media to brainwash the public and spawn hate-mongering followers. But then again, as I mentioned above, history lessons, such as one from Nazi, Germany, have not been learned. It’s mind-blowing and it’s ponderous to me … but for people like Rupert Murdoch