It’s often been said that football is a metaphor for life. At the time of this writing, I along with all fans of the Miami Dolphins and the St. Louis Rams NFL football teams are anxiously awaiting some word of which team Jeff Fisher, the best coaching candidate on the market at this time, will choose to take over the reigns as head coach. Obviously, there is a good deal of negotiating, contract haggling, power vying and money dangling at stake.  For many fans, the future of their teams’ success rides on this one man’s decision. Word was supposed to have come over the weekend, then on Monday or Tuesday … and of course this limbo has now extended to the mid or end of the work week, leaving many fans pulling their hair out. Yes, suffice it to say that everyone is watching ‘the pot’ waiting for it to boil, even as all involved know that a ‘watched pot never boils’.

Once you learn to quit, it becomes a habit. – Vince Lombardi

Some fans are so impatient for a decision that they are ready to give up on the man. Apparently, the anxiety over the wait just isn’t worth the prize for some. Sour grapes are already being thrown by those who claim ‘we don’t want a coach that doesn’t REALLY want to be here anyway and who is just after the money’. I’d suggest that this is a pretty foolish notion. Football, like all professional sports is a business. Therefore, it makes perfect sense that Jeff Fisher would hold out for the best offer he can get. Why even Judd Jugmonger tweeted last night “There ain’t no hurry for Jeff Fisher to ‘shit or get off the pot’. Let the man do his business.”

I find it interesting how many people are so willing to settle for less because of their impatience or impulsiveness. In kindergarten we’re taught that ‘patience is a virtue’ and that ‘good things come to those who wait’. Nevertheless, such words of wisdom were obviously lost on the scores that have perished in fatal toilet related incidents involving poorly executed ‘valsalva maneuvers‘.

Personally, I’m fairly impulsive by nature. It’s a trait that I’ve tried hard to drop over the years, but something about my creative nature spoils all my attempts. At times, my creativity urges me to take giant leaps, often before looking from where I’ve just leapt. Though sometimes I’ve landed on my feet, other times I took quite a fall … and the impact took its toll. Perhaps if I had taken a moment more to consider my actions, I would have fewer ticks in the ‘fail’ column. 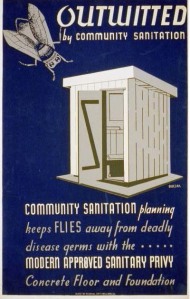 The only place success comes before work is in the dictionary. – Vince Lombardi

In today’s fast paced world, it seems to me that the concept and meaning of ‘patience’ may be taking on somewhat a negative connotation. It’s a word that is at times spoken in the same extreme breath as ‘idleness’, ‘impotence’ and ‘constipation’. Even in lesser breaths, having patience simply suggests ‘waiting’ – and you all know how much we hate to wait as a society. We all want instant gratification and immediate satiation. We don’t sip our wine anymore; we gulp it. Slowly savouring the flavor of a morsel food prepared with attention to detail has been replaced with ‘scarfing snacks’ and tossing Twinkies down our gullet for the instant sugar rush.

Given the above, it’s hard to imagine how success will ever follow the path of least effort. Skimping on time and energy eventually yields regret and mediocrity. Haste makes waste … and well you know what we do with waste; time to pull the chain, as my grandmother used to say (cue: a flushing sound).

When the game’s over, there’s only one winner. – Don Shula

It’s a shame that we have become prone to looking for shortcuts and ‘5 steps to success’ plans. The adage, “work smart, not hard” has been taken to the extreme and has been replaced by “take it easy”. OK, perhaps it’s unfair to say we’ve become lazy, but I think there is more than a modicum of truth in saying that we are less willing to work hard for what we want in life. In fact, I wonder to what extent we are even willing to pay the price of what attaining excellence entails. Have we become hell-bent to settle for second best just because we don’t want to invest the time and energy into going full-throttle after first place? Perhaps we need reminding that, as in football, there is no such thing as ‘second best’ – only winners and ‘losers’.

So, I think we need to reconsider our take on patience. After all, decisiveness that stems from rash thinking is just folly. Any fool can make a decision, but a wise man deliberates judiciously and then decides when the timing is right to act. That’s right, the better part of sound judgement is to take a deep breath, sit back, relax and contemplate. Go ahead, take more than a moment to think it over.

It was a horse-collar, it is no question. – Jeff Fisher

Recently, I gave up on another blog project I had started because basically it was ill-conceived from the start. It was born from a terrific idea I had, though with no real inkling as to what I could make of it. Six months later, I decided to abandon it, chalking it up to another example of ‘failing forward’. When it became to clear to me that it was time to go, gain closure and move on energy wise, I actually celebrated my decision to do so, having defied my own expectations and grown from the experience.

I do believe that artists need to challenge themselves and nurture their imagination by following their creative whims. However, in retrospect, had I had the patience to think a bit more on what I really wanted to accomplish with that blog project, or even in terms of what was feasible, I wouldn’t have jumped into things so quickly and put undue pressure on myself to create content at will. It should go without saying that the evolution of a creative project, like potty training, should not be rushed. Lesson learned … well, probably not, but at least it remains a subtle milepost on the road of life.