When was the last time you stepped outside of your head? If you have never done so, I highly recommend it. It can save your sanity. Trust me.

Recently, I’ve had a lot on my mind and just simply ‘too much on my plate’. So much so in fact, that at one point I felt my head teeter to one side, listing and threatening to capsize all rational thought. I did not take this as a good sign. Distracted by the obscenity of this circumstance, I began to obsess compulsively, despite my being repulsed at my impulse to do so. It was then when an errant thought arose, plopping into my mind; it was certainly more of a ‘plop’ and less of a ‘pop’.

At that moment, I found myself standing just off to the side of my mind’s mental highway, staring in bewilderment at a seemingly endless parade of thoughts. They lewdly sashayed their way down the neural pathway, hustling each other along like an errant festoon of Dionysian Mardi Gras party-goers. Now I can ‘surrey and picnic’ with the best of them, but this scene of fervent irreverence was quite surreal. I must confess, I had expected more of my thought processes. 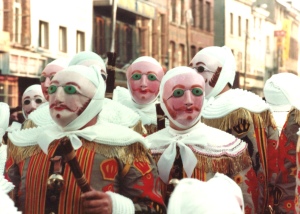 Some thoughts were noble and dignified while others were high browed. Many were just plain absurd, though bordering on creative. And then, there were those that were harried, troublesome and worrying. They were easy to spot. While most thoughts seemed justified in their constructs, these fidgety agitations moved along spastically, fettered with ticks, twitches and an occasional gut wrenching movement.

Upon closer observation, I began to cringe; not only were these solicitous misanthropes impeding the movement of the mind stream, they were proselytizing the more feeble-minded thoughts in earnest, polluting them with various vagaries of doubt, fear and woe. What a noxious bunch, I thought.

What was their purpose? Where did they come from? They seemed to manifest signs of disorder, but were actually quite calculating in defying any sense of normalcy.

I decide to confront one. I gingerly pushed my way into the mind numbing melee and grasped at one of these so called ‘heavier concepts’. Drawing it close to me, I was amazed that for all the weight it managed to throw around, it was pretty light. In fact, it had very little substance, but still managed to feign an obtrusive nature.

I asked where it had originated from, but it offered only hesitation. I appealed to its logic, but it dismissed such reason with fallacy. I demanded its motive for striking fear into the very heart of this person. It lobbed as a response only “You think, therefore I am” and something tantamount to “Be scared. Be very scared.” It dawned on me that I might be dealing with a card-carrying member of the ‘Intrasomatic Conspiracy‘! Coming to that realization incensed me to no end.

“What’s your game?!” I spat in a sputtering fit of outrage. “What do you want here? Where did you come from?” I blasted. It yielded nothing but fright filled non sequiturs. Shockingly, it deliberately made no attempt to justify its presence. Instead, it vehemently began to prey on my fears, vomiting anxiety raising ‘food for thought’ into the furthest recesses of my subconsciousness. Sick to my stomach, I began to panic. In horror, I noticed I had ground my teeth down beyond my gums. My chin mocked my forehead.

Luckily, a stray and noble thought intervened. “Oh, don’t worry. It’s really much ado about nothing.”